In this lesson I'm gonna show you a really useful type of chord called a "9 chord". It's used in all styles of music, and is particularly useful in the context of the blues.

All it is, is a dominant 7 chord, where you add the 9th scale step (Which is the same as the 2, but up an octave). It has a jazzier sound and is often used for the IV and V chord.

After going through the voicings, we're gonna play through the 12 bar form using thumb voicings for the I chord and 9 chords for the IV and V chord!
Open In New Window 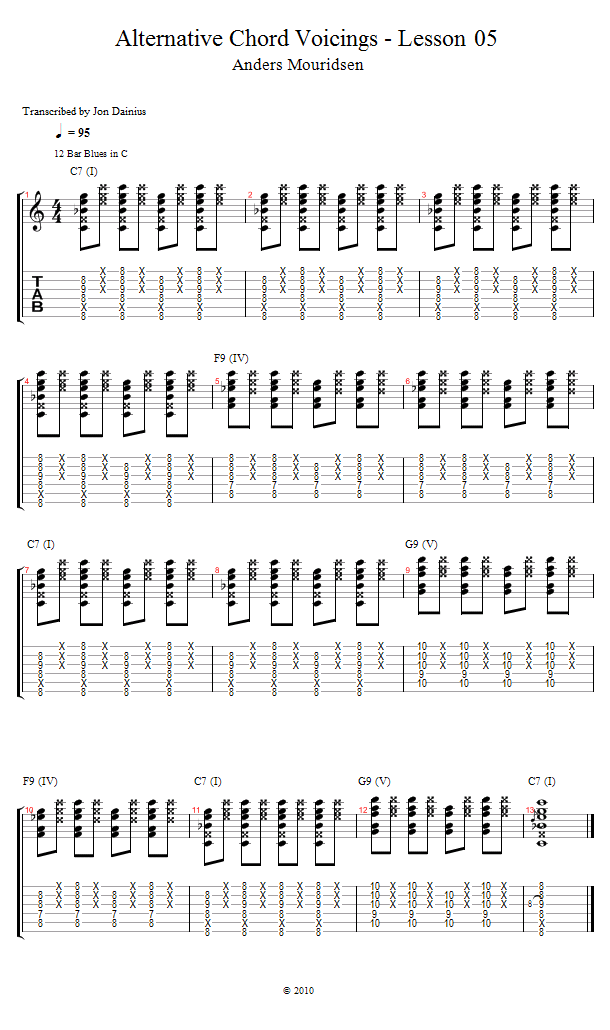 1: First Law in Blues: Intro to the 12 Bar Form
Intro to the 12 Bar Form In Blues
Making The 12 Bar Form Sound Like Blues
More 12 Bar Blues Tricks and Keys
2: Blues With Power and Barre Chords
Power Chords in the Blues
More Blues with Power Chords
Playing Blues With Barre Chords
3: Minor and Dominant Blues
The Minor Blues
How To Play the Blues Riff in Any Key
Alternative Chord Voicings
Variations of the 12 Bar Form
4: Blues Rhythm and Feel
Blues Strumming Patterns
Feels, Rhythms, and Grooves
Intro to Regional Blues Styles
5: Start Your Own Blues Lead Playing
The Most Important Notes
Make Music With The Notes You Know
Playing with Feel in Blues
It's All In The Timing
6: Blues Tone and Equipment
Guitars
Amplifiers
Effects
Odds and Ends
Getting the Right Setup

Congrats on a WONDERFUL site! -Sue

I find it quite easy (so far!) to navigate, and found the "where do I start" to be very helpful! I'm getting there!!

I LOVE the forum, too. I've never been one to use forums, but the GT forum is full of great people and helpful information at ALL levels! Congrats on a WONDERFUL site!!